Let’s take a trip to an American Kava Association serving establishment to uncover what it means to be an AKA-certified bar.

The bar is themed with elements from Polynesian, Miconesian, and Melanesian cultures and is beautifully decorated with many authentic artifacts such as hand-carved masks, large traditional Kava bowls, Tapa and Masi cloths, as well as smaller handcrafts in the bookshelves. The place is decorated in soothing earth tone colors with traditional bamboo and rattan accents. It is not overdone like a typical Tiki bar with clutter filling every nook and cranny of the establishment, but tastefully decorated with meaningful artifacts and educational materials.

Speaking of educational materials, there is an extensive library of literature and photo albums pertaining to Kava culture at the customer’s fingertips. These materials ranged from shorter books that convey the basic idea of Kava in a few pages, to 200 page World Health Organization meta studies for the more academically inclined consumer who is interested in the more intricate details of Kava. There are two large screen TV’s that are streaming surf videos, travel documentaries, as well as informational videos on Kava. The music is positive and upbeat and ranges from island vibes to reggae to tribal beats. The ambiance of the establishment exudes authenticity and a shows that the proprietors have a genuine passion for Kava and the cultures that use it.

There are chairs out front and out back for patrons to sit and chat and watch the sunset while making friendly toasts to one another. The patrons are friendly, welcoming and excited to meet a new face. They are very eager to share their enthusiasm for Kava and explain to newcomers the concept of a Kava bar and what Kava Culture means to them. Inside, the atmosphere is friendly, positive and the patrons are equally as outgoing. No one is an outsider here, if you are drinking Kava, you are automatically accepted into the “Kava Culture”; a community of people from all different walks of life who leave their problems behind and celebrate positivity with one another through the communal drinking of Kava at the Kava bar.

Indeed, the bar is filled with a diversity that is rivaled by few venues. Patrons range in age from college students, to 9-5 suit and tie businessmen, to the retired grey haired couple at the end of the bar. Doctors, Lawyers, heavy metal band drummers, and college students all sit to discus their opinions on various topics and enjoy toasts, “Bulas” while drinking Kava together. The tables are filled with laughing faces playing cards while the couch area has an epic giant jenga game ongoing. Some patrons were dancing with one another while others had found quieter places to share one on one connections. This is a very unique place, the likes of which are rarely, if ever, seen in American culture.

The bartender greets everyone who walks in and after exchanging names, verifies that the customer is of an appropriate age to drink Kava and politely asks if they have had any alcohol prior to arriving. The bartender is friendly and very knowledgeable about Kava and the cultures that drink it. After a brief introduction to the plant, the cultures, and what to expect, the bartender teaches patrons the traditional Fijian way of drinking kava: A single clap, followed by a “Bula” and then three claps after the bowl of kava is taken in a single continuous drink.

The house Kava that is served is of excellent quality: It is not harsh, gritty, or overtly peppery. It is smooth on the palate, and easy to drink, yet the tell tale sign of potency, the numbing of the tongue and lips, is most certainly present in abundance. Watching the bar tender produce the kava, it is done in a standardized method to produce the exact same Kava product every time, one that is not too strong, nor too weak. Upon asking, the bartender is able to explain in certain detail, the kava that is being served down to the variety of the Kava, as well as the region that it was harvested and the age of the root. 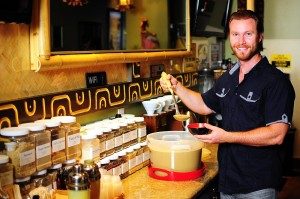 The quality of the Kava is substantiated by a certificate of analysis, which is a document that shows a detailed readout as to the quality of the Kava that was being served that day. The bartender explains that each and every batch of Kava that comes in is thoroughly lab tested for contaminants such as mold, bacteria, heavy metals, and pesticides, among other quality markers, ensuring that the customers at this establishment were consuming the highest quality material available anywhere.

While the certificate of analysis can substantiate the quality of the Kava, the Kava served here most certainly returns the favor. After three 4 oz “shells”, the effect is an obvious relaxation, pleasant sedation, and an increased feeling of well being and sociability. The stresses of everyday life seem to melt away, as do the nagging minor aches and pains associated with sitting in a chair at work all day. The house kava is a perfect blend of the physical and mental relaxation that Kava is praised for. Furthermore, there is no stomach upset or nausea with this Kava as there is with lesser grade, non daily drinking kavas such as wild or Tudei varieties. 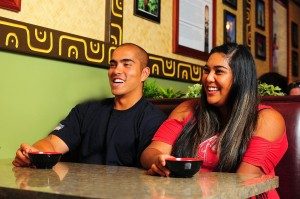 On the menu board are various types of traditional Kavas from all over the South Pacific for Kava connoisseurs to discern the subtle and not so subtle differences between Kavas from different regions. Descriptions of the Kava include words such as relaxing, cerebral, happy, mellow, and tension-taming, and “minor aches” but did not include medical terms such as anxiety, insomnia, muscle relaxing, or pain relieving. The descriptions give the customer an idea of what to expect while still following the FDA’s laws with regards to making claims.

The American Kava Association Certified Kava bar is an overwhelmingly positive and authentic experience that promotes Kava Culture and sheds a much needed positive light on Kava. Establishments such as this one will ensure the long-term marketability of Kava in the United States such that kava will be available for generations to come.